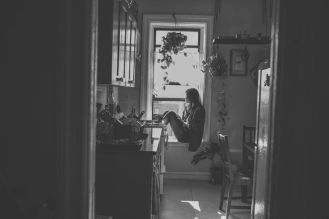 Not long ago, while visiting my parents, my mother and I were discussing a much needed painting as part of home renovations. We talked about the wallpaper I recently got rid of, and some she has hopes of retiring soon

Then, as now, I am reminded of the things that matter – that which we keep. I believe I commented, ‘the wallpaper isn’t bad but I’m not so endeared to it that I’d be hurt if you painted over’.

And yet, in retrospect, I realize there are other ‘things’ that I’ve been sentimental over at times, though the sentiment was tied to an associated memory rather than the physical. You’re probably struggling to understand, so let me give you some examples.

Easterners worn us of attachment, and I realize how easy it is to get tied into things that don’t matter, like the wallpaper design or whether you have the latest trend in ovens. For years, I bought clothes at upscale places. Now, I shop Goodwill, and savor the bargains. But deeper, I feel another association. My childhood is peppered with memories of trips to the ‘rag store’ (as my grandmother would call them), hiding under tables whenever she would cry out, ‘Bobbie, I found you some panties.’ 

That which we keep is that which becomes a part of us. It’s not a thing, and it’s not even a time. It’s a moment that exists still, as close as the scent of an orange honeysuckle, or in the feel of tags against my fingers.

It’s a favorite pair of earrings and words nearly worn thru.

When I started this piece, I thought on time. There are those who claim that I spend too much on the past. And yet, I would disagree. I spend my time (now) living and part of the joy in living is a love for how I got to this place. You see, despite what they say, time isn’t a thief. Time is your constant companion. When you are broken, it reminds you of the need to move forward. The real thieves are hatred, bitterness, resentment, and regret.  They take all you’ll give – health, relationships, and every bit of your joy they can get.

I’d make a lousy Buddhist.  I suspect part of the reason is that I’m a poet, and a keeper of stories (of the old ways). It’s not about ‘things’, but about everything, everything come of love.  Nothing matters; everything matters.

Someone near and dear reminds me that enlightenment is seeing things as they really are.  With time, I’ve come to revel in my wilderness….to linger softly with my tears,  to see with eyes (but more, with my soul).

May you cling warmly to the tender hands of time.